The interior has changed quite a bit but still retains much of the original wall materials. A very unique detail about this property is that it has the original 8 bay horse and carriage shed with full height hay loft attached to the building. It appears to be the only existing carriage shed in this area of Western N.Y


The old church served the community well for almost 70 years, boasting 1000 members and 14 pastors over that period, until 1896 when a new Baptist church was built in town. The congregation moved to the new building relegating the old building to occasional service. Eventually it became vacant and fell into serious disrepair. However in 1924 the Sardinia Home Bureau purchased the building and together with an organization known as the ”Sardinia Community Incorporation” remodeled the old church into a beautiful and useful community center. It was then when a two story addition was added to the back of the building to house a stage and restrooms. They also choose this time to remove the support columns that originally held up the balconies and suspended them from heavy rafter cables anchored in the roof timbers to allow more floor space. In addition a large concrete porch was added to the front of the building for use as an outdoor stage. In 1934 a full basement with kitchen was constructed under the building.


One of the major events held there was a large-scale agricultural fair. However with the onset of  World War II interest in the fair declined and it was discontinued in 1942. In 1945 the Sardinia Community Inc. voted to dissolve the corporation and deeded the property to the Town of Sardinia for use as the Sardinia Town Hall.  It was then renovated to facilitate its use as a municipal building for monthly meetings of the Town Board and weekly court sessions. When not being used for town business, the building was rented out for use by different community groups and individuals.


In 1979 the Town Hall was moved to a different building and the “Old Town Hall” continued to be used as a community center as well as housing the Historical Society museum. Recently after some discussion the town agreed to transfer ownership of the property to the Historical Society. We are currently in the process of remodeling with the ultimate goal of a full restoration. 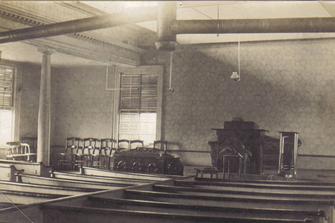 The original interior of the church before remodeling